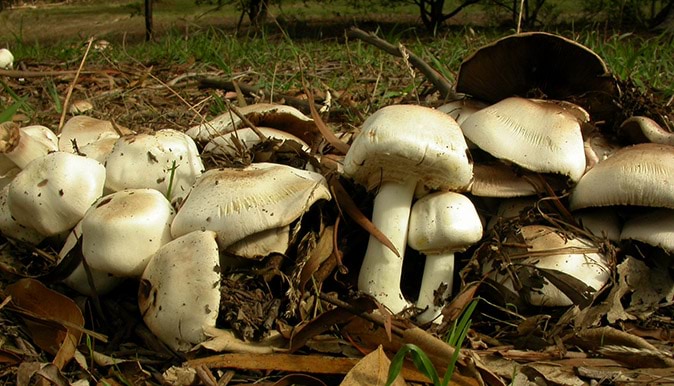 Mushrooms are a type of fungus. Australia has many varieties of wild-growing fungi, many of which are edible. However, a few types are poisonous or even deadly.

Contrary to popular belief, there is no home test that can distinguish between edible and poisonous varieties. The only way to tell whether a wild mushroom is safe to eat is to have it identified by a mushroom expert (mycologist).

If you are unsure if a mushroom is safe to eat, don’t eat it. It is recommended that you only eat mushrooms you have bought from the supermarket, greengrocer or another reputable source.

If you suspect you or your child may have eaten a poisonous mushroom do not wait for symptoms to occur before seeking medical attention.

The VPIC staff member will take a brief history from you and give you the appropriate advice. It may be necessary for you to seek treatment through your doctor or the emergency department of your nearest hospital.

It helps to have a sample of the mushroom. VPIC staff may ask you to send them a photo of the wild mushroom to help in the species identification and risk assessment.

If the person has collapsed, stopped breathing, is having a fit or is suffering an anaphylactic reaction, immediately ring triple zero (000) for an ambulance.

Do not ring the Victorian Poisons Information Centre in an emergency.

The three main effects of poisonous mushrooms are:

The yellow staining mushroom and the death cap are two poisonous mushrooms that grow in Victoria.

The yellow staining mushroom (Agaricus xanthodermus) is the most commonly eaten poisonous mushroom in Victoria. This species commonly grows wild in lawns and gardens, and looks very similar to edible mushrooms.

The death cap (Amanita phalloides) is potentially fatal if eaten. Characteristics include:

If you deliberately eat wild mushrooms in the hope of experiencing a drug-related hallucination, you are very likely to become unwell. The most common symptoms of fungi poisoning are gastrointestinal upsets such as vomiting, diarrhoea and abdominal pains. A few types of fungi are deadly, such as the death cap mushroom.

Protect your children from mushroom poisoning

Many varieties of poisonous mushroom grow wild in Victoria. Most young children who eat poisonous mushrooms find them in the garden at home. Children younger than 5 years of age have a natural inclination to put things in their mouths. If you have a toddler, regularly check your garden for mushrooms and remove them to reduce the risk of accidental poisoning.

Protect your pets from mushroom poisoning

Pet owners should take particular care when walking their pets in areas where mushrooms may grow. Where possible, remove any mushrooms from their yard before they have a chance to eat them. Dogs are more likely than cats to ingest mushrooms.

Pets can develop a range of illness from eating wild mushrooms including a gastroenteritis type syndrome to severe life-threatening disease and death.

If your pet has ingested a wild mushroom, you can call the free Animal Poisons Centre on 1300 869 738 for advice.