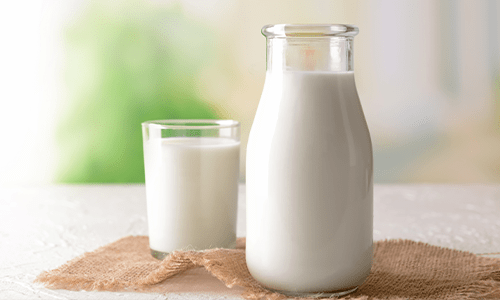 Milk is an excellent source of vitamins and minerals, particularly calcium. It has an important role in bone health. Nutritionists recommend that people have milk and other dairy products, such as yoghurt and cheese, every day as part of a balanced diet.

The Australian Dietary Guidelines recommend that people over the age of 2 years have mostly reduced fat products to lower the amount of energy (kilojoules) while still getting all of the other nutritional benefits from dairy foods.

Milk and milk products have a good balance of protein , fat and carbohydrate and are a very important source of essential nutrients, including:

Milk products also have ‘high-quality proteins’ that are well suited to human needs. For example, having milk (or yoghurt) with cereal can provide amino acids that may be lacking in the cereal product.

There are many myths about the negative impacts of milk on health. Changing how much milk you drink because of these myths may mean you are unnecessarily restricting this highly nutritious drink.

Australians often restrict dairy foods when they try to lose weight, believing them to be fattening. While dairy products naturally contain fat, there are many reduced fat products available.

Dairy foods like milk, yoghurt and cheese (particularly reduced-fat products) are not a threat to good health if had as part of a well-balanced nutritious diet.

Many people in Australia believe that nasal stuffiness or increased mucous is related, in part, to how much milk you drink. However, there is no evidence to support this theory. Milk doesn’t encourage extra mucous production.

Milk is an important source of nutrients for children. A glass of milk with a small amount of flavouring (such as one level teaspoon of chocolate powder) is a healthier option for children than other sugar-sweetened drinks such as soft drinks, flavoured waters, fruit drinks and cordials. However, if you choose to give your child flavoured milk, this should be in moderation.

As children move into their teenage years, the time when they need the most calcium, they tend to drink less milk and more sugary soft drinks. As milk is a healthier choice, it’s worth encouraging teenagers to drink reduced-fat flavoured milk rather than soft drinks.

Water and plain milk are the best drinks for children and teenagers.

Milk and milk products are thought to protect against tooth decay. Eating cheese and other dairy products:

Most milk on the market is pasteurised (heat treated then cooled). While pasteurisation reduces the amount of some vitamins, such as vitamin C, it also kills bacteria.

Never drink unpasteurised or raw milk, as you have an increased risk of gastrointestinal illness from pathogens (bugs, germs, bacteria).

There are many types of pasteurised milks on the market, including:

When shopping for milk, you might have seen the word ‘permeate’ on the label. Permeate is the term used in the dairy industry that refers to the lactose, vitamin and mineral content that has been extracted from milk using ultrafiltration – it is not an addition of anything to milk that was not already there.

The quality and composition of milk varies between different breeds of cows, different farms and at different times of the year. Because of this, sometimes manufacturers use permeate to ‘standardise’ the milk, to ensure a consistent product is produced year-round.

If a person has an allergic sensitivity, it’s usually because of one or more of the proteins in milk. The proteins in goat’s milk are closely related to those in cow’s milk, so replacing one type of milk with the other usually doesn’t help.

Milk allergies are more common in very young children and most tend to grow out of them or build up a tolerance to milk.

Lactose is a type of carbohydrate or sugar that naturally occurs in milk from any mammal, including humans. Normally, an enzyme in the small intestine called lactase breaks down lactose so it can be absorbed into the bloodstream.

Some people don’t produce enough lactase. When they drink milk, undigested lactose is broken up by the bacteria in their large intestine causing gas, bloating, pain and diarrhoea. This condition is called ‘lactose intolerance’.

Milk and milk products are highly nutritious, so people who are lactose intolerant should not give them up entirely. If you have been diagnosed with lactose intolerance, try using lactose-free milk, or continue to have standard milk but in lower quantities.

Most people with lactose intolerance can handle small amounts of lactose such as a glass of milk, which contains 8 to 10 grams of lactose. Natural yoghurts are usually well tolerated because the bacteria have their own lactase that breaks down the lactose in the milk.

Some dairy foods contain less lactose than others and may be better for people who have lactose intolerance. For example:

Foods that contain lactose are better tolerated if eaten with other foods or spread out over the day, rather than being eaten in large amounts all at once.

Soy and other plant-based milks as alternatives

There are many plant-based milks and plant-based milk products (such as custard, cheese and yoghurts) available to buy. These include soy, rice, oat, coconut and nut milks such as almond and macadamia.

These ‘milks’ are all lactose-free and suitable for people following vegan diets. However, they don’t all provide the same nutrient types and amounts as regular cows’ milk, so it is important that you read their labels closely.