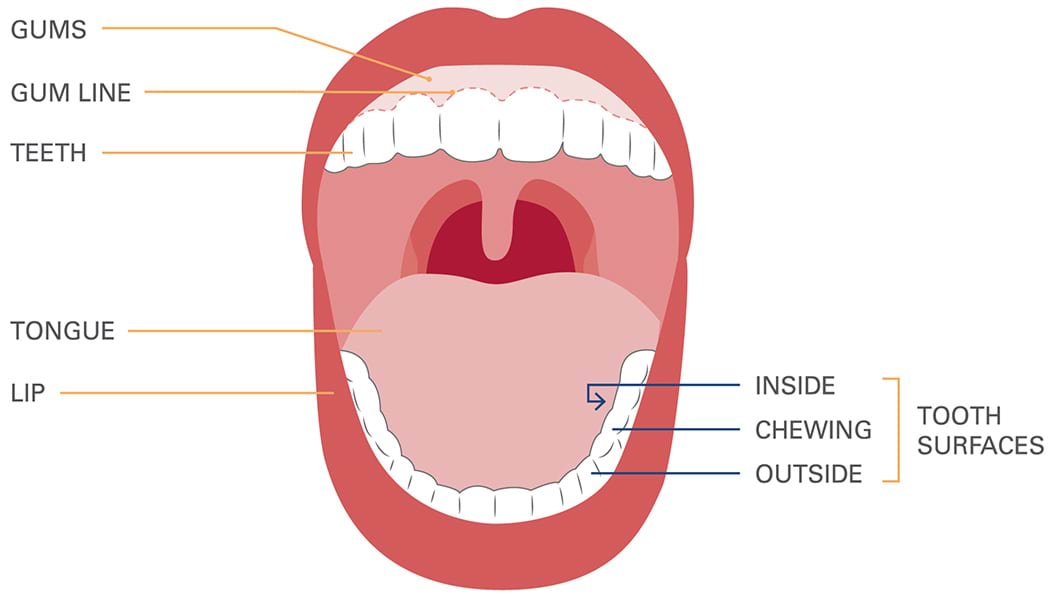 The mouth is an oval-shaped cavity inside the skull. The two main functions of the mouth are eating and speaking. Parts of the mouth include the lips, vestibule, mouth cavity, gums, teeth, hard and soft palate, tongue and salivary glands. The mouth is also known as the oral cavity or the buccal cavity.

The digestive tract begins at the mouth. Digestion starts when food is taken into the mouth, ground up by the teeth and moistened with saliva. Saliva has an enzyme called amylase that starts to break down carbohydrates into sugars. Movements of the tongue help to push the wet, soft mass of food to the back of the mouth where it can be swallowed. A flap of skin called the epiglottis closes over the windpipe (trachea) to ensure that food is directed into the oesophagus – the tube that leads to the stomach.

Talking requires a complex series of events to occur in exactly the right order. Expelled air runs through the vocal cords in the larynx. The vocal cords vibrate, which produces sound. The type of sound depends on the tightness of the vocal cords and the force of the expelled air. Movements of the tongue and lips help to shape the sounds. Other mouth structures involved in the production of sounds include the hard and soft palates and the nose.

The main structures of the mouth include:

The trigeminal nerve is the major nerve of the face. Its roles include sensation and some motor functions such as biting, chewing and swallowing. Also known as the fifth cranial nerve, it has three main branches, including:

Some disorders of the mouth include:

View all mouth and teeth